"Eric [Fogleman], I was inspired by your account,
here’s my experience of the extreme."
Eric Brandt 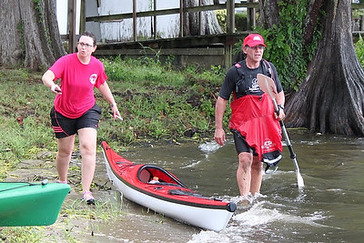 Jessica Brandt, left, helps her father begin the kayak leg.
Swim
It wasn’t the best start!  When my son chase and I arrived at the dam, boat strapped down and gear stowed in a bag, the race had already started.  Thanks for the little adrenaline rush, Mark.

By time I was half way into the 30 minute shallow walk, I had caught up with some of the pack and had a nice visit – then the swim was on.  I wear glasses, so it’s hard to tell where I was going.

Chase did a great job keeping me on path.  In fact, it seemed to me that everyone was swimming far west, downwind of the buoys, appearing to take a short cut.  When I asked Chase he said no, they would eventually have to head east to get to Dales.  Further he said, the wind was going to blow harder as the sun came up and if I stayed upwind now, I’d have a much easier swim into Dales while everyone else would have to fight the stronger winds.

Nice call Chase!  It was my best lake swim ever, barely under 3 hours, but nowhere near any of the fast times of some of the fish in the classic. 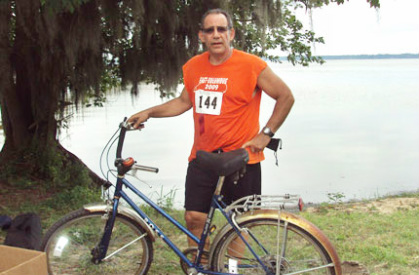 Brandt with his "3-speed clunker" in 2009.
Bike/Hike
Dana, I think you’re right; we’re about maxed out here.  In my two prior bike hikes I rode an old 3 speed clunker.  For the extreme, I secured a nice urban road bike and shaved only a few minutes off my prior times.  It was lighter and easier in the woods.

Tip:  when in the soft sand I kept the front tire lifted and pulled the bike through on its rear tire. 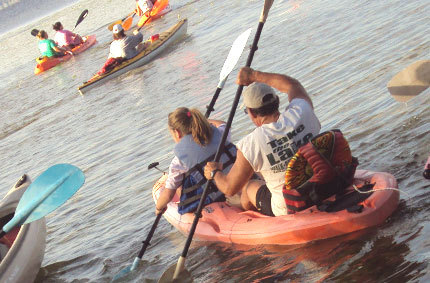 Brandt paddling with his granddaughter in 2010.
Kayak
This was the difference maker for me.  In my two prior classic paddles, I had a 12 ft tadpole (Time: 3:51) and a sit on top dual that I paddled with my 9 year old granddaughter (4:05).

For the Extreme I had a 17.5 ft. needle, much faster – very tippy.  The big difference was it had a skirt that kept all the rain and wave washes out of the cockpit. 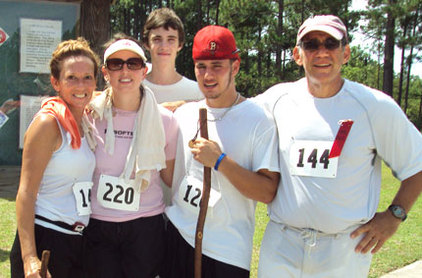 The whole "Bramn Dandt" family in the 2009 Walk/Run.
Run/Walk
This was bizarre.

[During the paddle,] I knew I was about 10 poles ahead of the next boat when I came into Dales.

I am not a fast runner but I was motivated to stay ahead.  When I entered the State Park, Chase told me I was almost a mile ahead of the next runner (Tom).  I kept pushing all the way through the park.

When I came out at the dam the crowd was excited, they told me Tom was only a few minutes ahead of me and I could catch him.

Through communication with Chase, going back and forth and talking with people on the route, we determined that Tom took the nature path, and I stayed on the paved road into the parking lot.  Tom’s route was almost a half mile shorter.

OK, but what was the correct route?  Chase's solution was for me to get into the truck and make up the difference and put it back on fair footing.  I wouldn’t do it; a great and valuable moment for me and Chase.

In the end, this was my greatest take away from the extreme.  Given our times and trail marking issues, Co-winners was a perfect solution.
Nutrition
A few days before the challenge I went to GNC and came out dazed and confused; goop, gels, powders and stingers.  They all tasted bad, didn’t seem to have much effect and were expensive.  I stuck with chocolate milk, Gatorade, power bars and peanut butter.  They seem to have worked the best, at least they tasted better.  I also started hydrating a few days before the challenge.

Next year my goal is to either break 11 hours or complete all the events with my grandchildren.  Either outcome is a winner no matter where I finish.